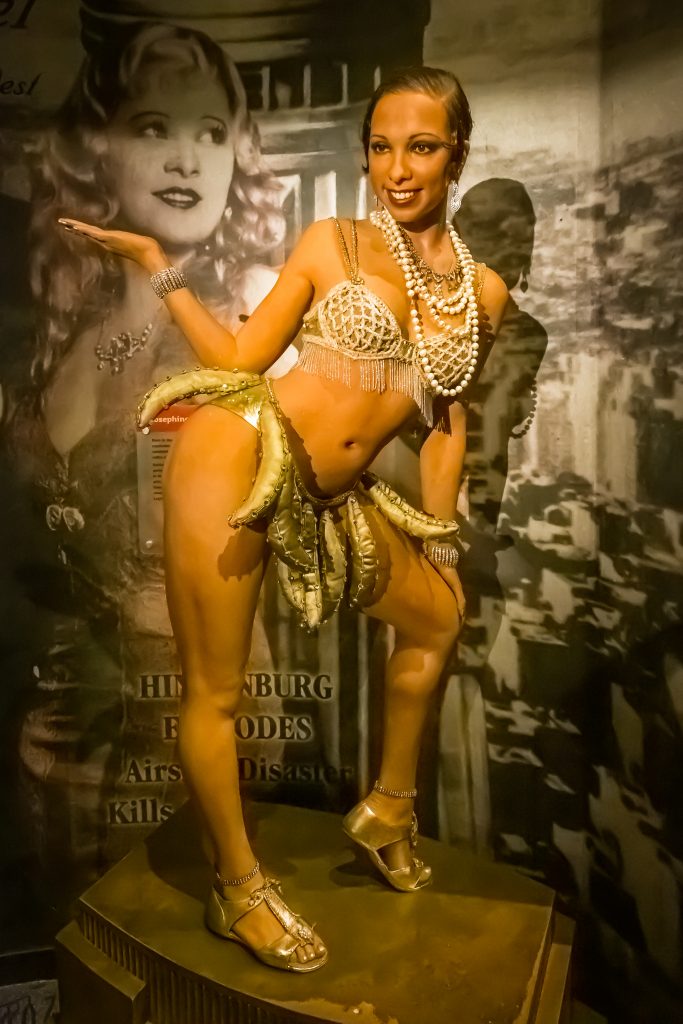 JOSEPHINE BAKER IS AN ICONIC FIGURE TO MILLIONS, WRITES JONATHAN CASH, BUT MANY PEOPLE HAVE NEVER EVEN HEARD OF HER. BAKER IS A HERO TO MANY, INCLUDING BEYONCÉ, WHO WORE A BANANA-THEMED SKIRT IN A TRIBUTE TO JOSEPHINE

Dancer, singer and actress, Josephine Baker was a millionaire by the time she was 24 in 1930. In fact, it is said that she was the wealthiest Black woman alive during her lifetime.

She was bisexual and had relationships with women as well as men, shocking society at every turn with demonstrations of her personal freedom and choices.

Although she was married four times, Josephine is reputed to have had relationships with several women including artist Frida Kahlo, French author Colette and blues singer Clara Smith.

So how did an uneducated girl from St. Louis, Missouri, become a superstar?

Josephine’s love of performance led her to her role as a dresser for the cast of Broadway revue Shuffle Along in 1921. She learned the routines and when a dancer was ill she stepped in, deliberately crossing her eyes, pulling faces and looking clumsy. She remained in the show for the rest of its run before a wealthy socialite asked her to join the troupe of African-American production La Revue Negre which debuted in Paris in 1925.

This was an attempt to import a white interpretation of Black culture to Europe and Josephine was a sensation. With a male dancer, she performed her “dance sauvage” and people became infatuated. Her sensual, liberated, animalistic dance became the talk of the town.

She then worked at the Folies Bergère where she performed a dance, wearing her now-infamous banana skirt and not much else. This caused uproar and she cemented her place as a determined, sure,performer who would challenge boundaries of sexuality and freedom.

A song she popularised later was J’ai Deux Amours (I Have Two Loves) which some have interpreted as a reference to her bisexuality. Crowds thought she was sensational while conservatives and religious groups would protest if she performed in their cities.

She adopted a dozen children from different races and religious backgrounds to prove that racism is unnatural and that we can all live in peace.

She named them her “Rainbow Tribe”. Unfortunately for the children, Josephine charged people admission to see her family living together in her château Les Milandes in the South of France.

As the children grew older, Baker was forced to sell the château which she couldn’t afford, and Princess Grace of Monaco provided them all a house there.

Some resented their mother, with one son, Jarry, who told her he was gay, saying that they weren’t allowed to develop the way they wanted to. However, her adopted family was living proof that Josephine was determined to show that we can all live together in peace.

“After seeing African-Americans being attacked and murdered, she became a powerful and outspoken advocate for civil rights”

France gave her freedom, she said, and she was amazed that white people asked her to dine with her. And so, in later years, she repaid the country she loved by working for the French Resistance during WW2. The French military thought she would be a good asset, because she was able to travel to different countries and perform in many places with access to senior officials.

She mixed with military officers and politicians, went to embassy parties, and put herself in dangerous situations and gained information before passing it on written in invisible ink on her sheet music.

She also worked for The Red Cross, driving an ambulance during the war and, one day, filled it with coal, driving the vehicle to poor districts of Paris, throwing out its contents to the needy.

Baker also loved animals, and, despite the menagerie she owned (cats, dogs, pigs, goats and snakes and others), she also had a cheetah who she called Chiquita. Always marching to the beat of her own drum, she walked Chiquita through the streets of Paris, enchanting and terrifying people in turn. Nothing wrong in walking a big cat who wears a diamond necklace, surely?

Having been born into poverty in 1906 St Louis, Baker witnessed race riots which had a profound effect on her. After seeing African-Americans being attacked and murdered, she became a powerful and outspoken advocate for civil rights. Years later, she spoke alongside Martin Luther King when he delivered his famous “I Have a Dream” speech in 1963.

During a visit to the US in the 1950s, she was refused hotel rooms she had booked, and experienced problems with service at New York’s famous Stork Club. She complained publicly and became involved in a moral war with broadcaster Walter Winchell who was in favour of segregation.

Bearing witness again to racist attitudes, she told nightclub and theatre owners that she wouldn’t perform unless Black Americans could sit with white people.

As a result of taking a stance and helping to change attitudes, the NAACP (National Association for the Advancement of Colored People) named 20 May as Josephine Baker Day.

In 1975, she was due to star in a long-running show at the Bobino theatre in Paris. She garnered some of the best revues of her life but four days after opening night, at the age of 68, she passed away following a cerebral haemorrhage.

France demonstrated its love for her as tens of thousands of people lined the streets to pay their respects as they watched a coffin carrying Josephine dressed in her military uniform.

In November 2021, she was reinterred at the Pantheon in Paris, a place reserved for France’s greatest heroes, and became the first Black woman to do so.